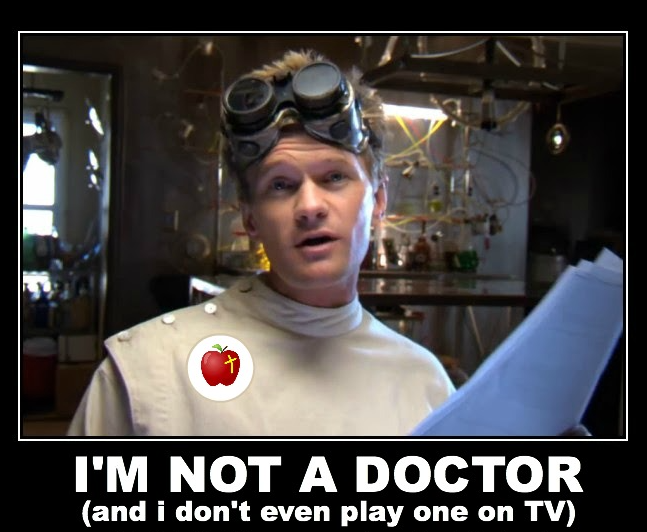 So here’s a thing that’s come up in conversation (again) today.  A patient referred to my graduate student clinician as “almost a doctor!”  I had to clarify that she isn’t becoming a doctor, she’s becoming a speech pathologist.  The patient asked, “but aren’t you doctors? Don’t you work in hospitals?”  We had an enlightening conversation – I *do* work in a hospital, Toronto Rehab to be exact, but that doesn’t automatically make me a doctor.  If it did, I bet the fine folks who work at Druxy’s in the lobby would be thrilled!

But no, despite the occasional need for a lab coat and my penchant for House MD, I’m not a doctor. Speech pathologists actually can’t call themselves “doctor”, even if they have a doctorate! Our College doesn’t want you to be confused and think maybe we are THAT kind of doctor, so we just can’t use the term. Like, ever. If you say, “What’s up, doc?” all Bugs Bunny styles, I’m going to have to hold up a sign that says *NOT AN ACTUAL DOCTOR. If I say “let me just doctor up this worksheet for you”, I’ll probably immediately play a bad informercial voiceover that says NOT A DOCTOR just to make sure it doesn’t get back to the College that I said “doctor”.

So if you’re looking for a voice “doctor”, what you’re looking for is an ENT (an ear, nose and throat doc) or even better, a laryngologist, which is basically the “T” (for throat) of ENTs. They are a great member of your voice care team and an actual doctor! They can write prescriptions and everything. So just know that if my agent gets me a gig as “Celebrity Voice Doctor” on Murdoch Mysteries or “Dr Voice” on one of the Law & Order franchises (hey, a girl can dream!), I’m not a doctor. At least not in real life.

Powered by Convert Plus