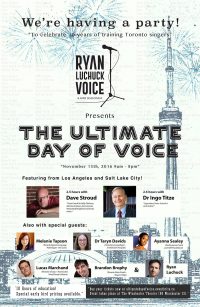 We are excited to announce that on Sunday November 13th, Vox Cura’s Melanie Tapson will be sharing the stage with well-known Toronto voice teacher Ryan Luchuck at The Ultimate Day of Voice — a day of voice education.

The event, which will be held at the Winchester Theatre here in Toronto, will also feature 2.5 hour sessions with esteemed voice coach Dave Stroud and legendary voice scientist and author, Dr. Ingo Titze.

These two heavyweight speakers need no introduction, of course. Dave Stroud has coached stars such as Michael Jackson, Kelly Clarkson, Demi Levato, and Natasha Bedingfield. Dr. Titze, an award-winning voice scientist and author, is known for developing the straw phonation technique, which is currently so popular with voice teachers and therapists. He is also executive director of the National Center for Voice and Speech, and Adjunct Professor in the Department of Otolaryngology/Head and Neck Surgery at the University of Utah in Salt Lake City.

Tickets, which cost less than a single hour with any of the speakers on the roster, can be purchased here.

We hope to see you on November 13th for the Ultimate Day of Voice!

The Ultimate Day of Voice